This website explores the Dutch startup ecosystem through the eyes of almost 600 Dutch startups, based on their Twitter data. The concept 'ecosystem' draws on a biological metaphor explaining the entrepreneurial scene -or climate- as a finite system of interdependent heterogeneous actors tied together through various relations (now, hang in there). The startup ecosystem presented on this website is an effort to map actors that are important to Dutch startups, including incubators, accelerators, news media, specialized platforms, b2b services, other startups, co-working spaces, research institutes et cetera. These network graphs can be used to explore, to map and to position. The results shown below are part of the findings of my research master thesis at the UvA, the full paper can be accessed here.

What would happen if one would use the Twitter data of almost 600 Dutch startups to map their interaction into one large network? Look through the eyes of Dutch startups to the local ecosystem, and see which parties are important to them. 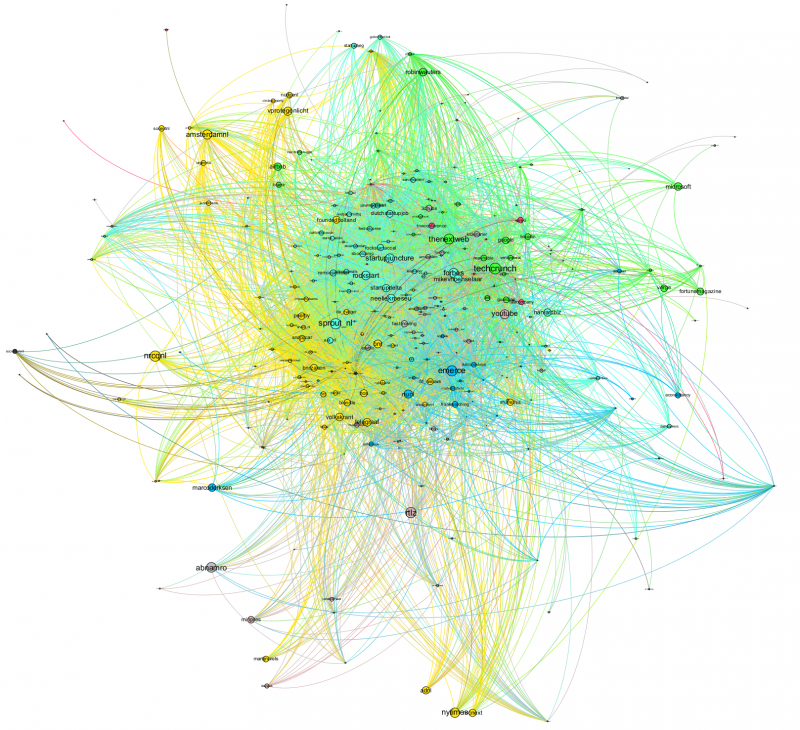 How to read such a network?

What can be done with such a network analysis? This research zooms in to particular participants to see where they are positioned, with additional interviews to see how they tap into the entire network. Social entrepreneurs with growth/scaling potential are chosen because of their impact-first mentality over a sole revenue-based focus. Included in this profile:

Where are they positioned in the network above? 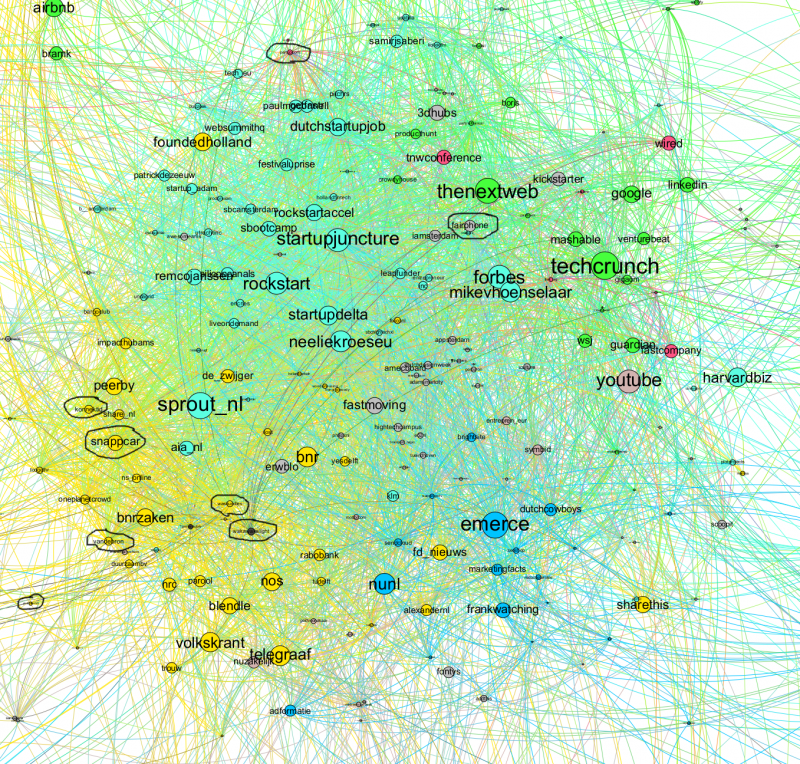 Another way to visualise how these ‘social startups’ tie into the ecosystem is by colouring their connections black: 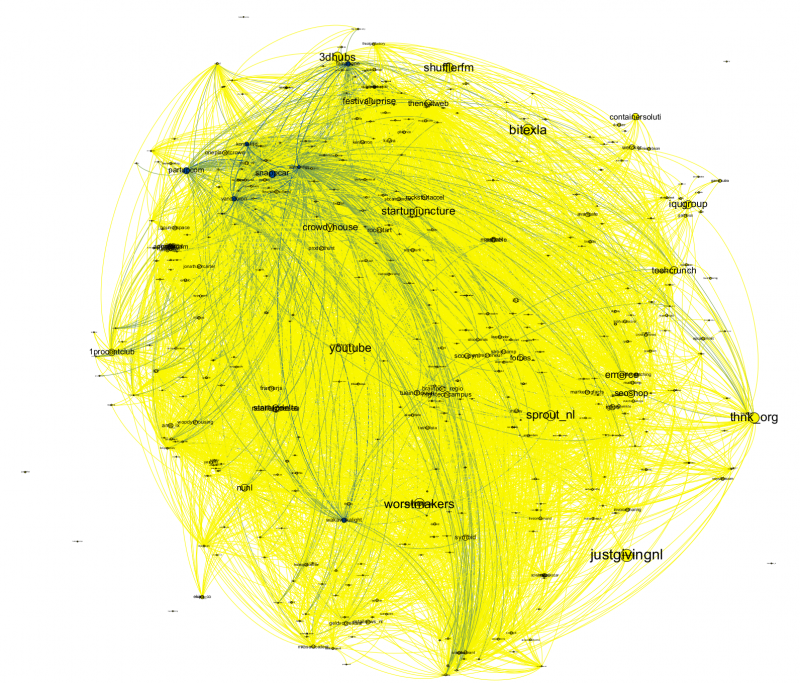 What can be said about the position and integration of the nine social startups?

Together with these social startups, another 5 organisations have been interviewed for their role seems important to integrate the sharing economy / sustainable entrepreneur cluster, being: Pakhuis de Zwijger, Sprout, Share NL, Social Enterprise NL and Impact Hub Amsterdam. 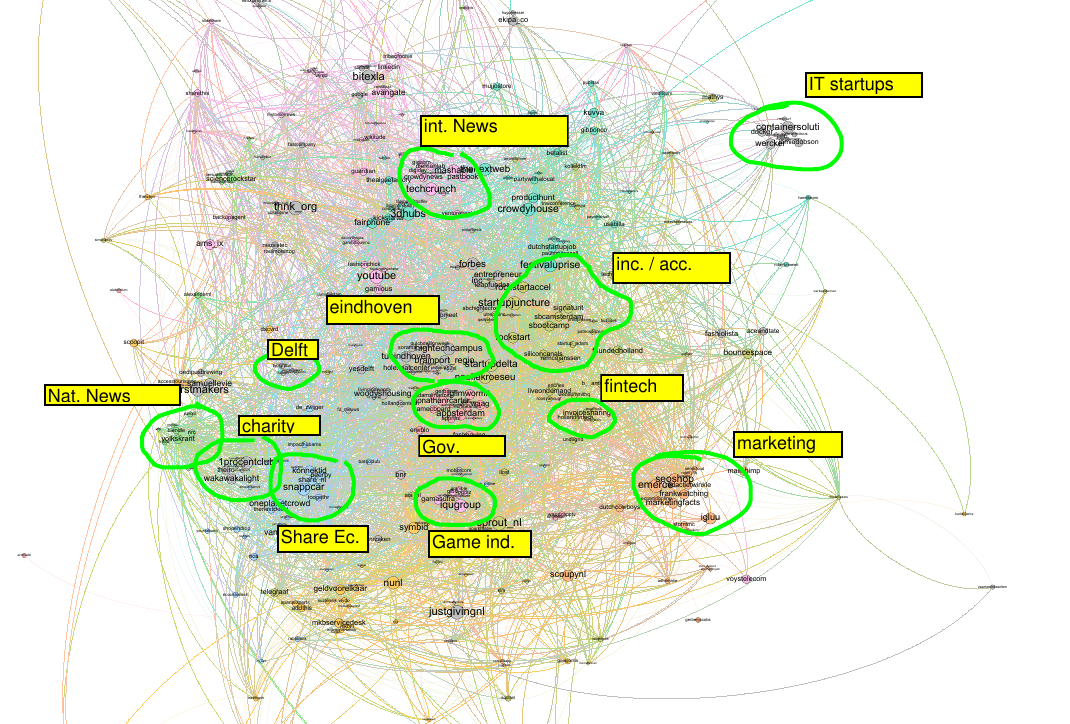 Last but not least, a general cluster-based analysis allows to find the various clusters distinguished in the Dutch Startup Ecosystem. Simply looking into the actors involved in such clusters (together with interview data – see below), indicates some themes around which the clusters organize themselves. A zoomable map of this analysis can be downloaded here.

But why these interviews? Talking to people on ground level is crucial to understand the mechanisms at work under the surface of these graphs. Interviews helped to explain, nuance and complicate the findings in the network while creating sensitivity to the limitations of Twitter-driven analysis too. See what implications these interviews lead to in my recent blog post ‘the politics of network graphs‘. Some of the limitations can be found in the presentation I did at the Entrepreneurship Future conference.

Or drop a line at:

This project has been established with the help of Dealroom and in a collaboration with Digital Methods Initiative [UvA].

Keen on exploring the upsides and pitfalls of combining data analysis practices with ethnographic tradition. Where data analysis has a strong exploratory potential, bottom-up interviews help to explain, validate and scope the analysis. At home in messy data, scraping social media, social network analysis on the one hand and qualitative research, hypothesis making and interview techniques on the other.

Other Digital methods | media analysis projects :
1. COP21: NGO’s use of Twitter to push their agenda in the public sphere
2. WhoMadeMyClothes: Seeking the Voice of the Textile Worker
3. Greenpeace (media analysis / evaluation)

Or drop a line at: